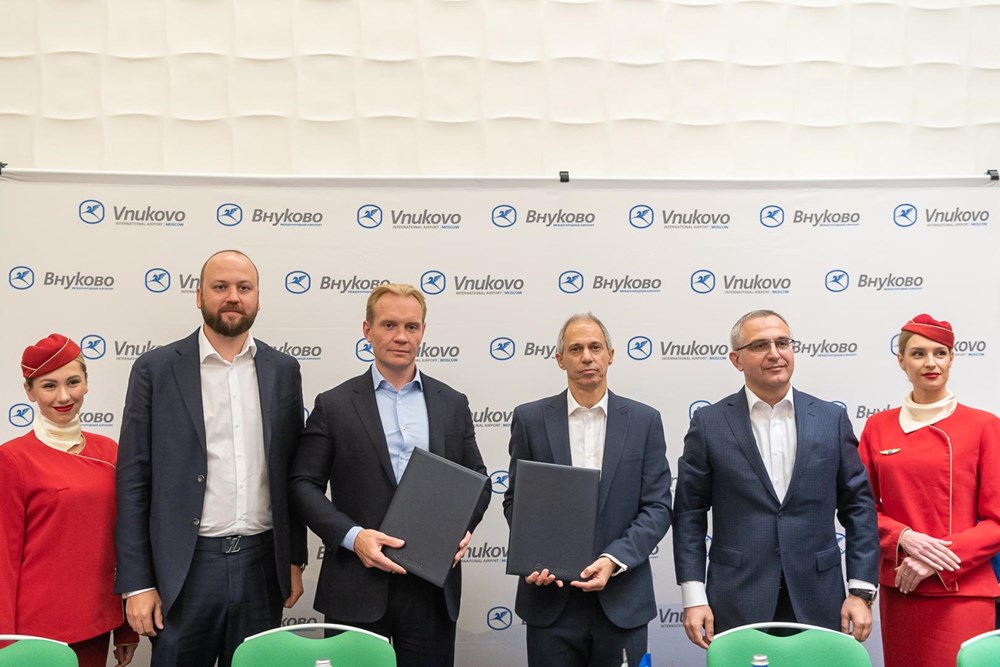 The partnership main goal is to increase passenger traffic between the regions of Greece and Russia. This opens up broad prospects for development of outbound and inbound tourism between the two countries. Together, both companies plan to increase their share of voice in this area. Both sides see fertile ground for further expanding of bilateral cooperation.

Vnukovo International Airport is investing in the development of the Ellinair fleet with the aim of launching two aircrafts at the Vnukovo airport at the first stage. This will enable the air carrier to increase its fleet, and, in particular, by the summer season of 2020, it will replenish with two Airbus A320 aircraft.

Flight Moscow (Vnukovo)-Thessaloniki will be operated on a regular year-round basis; it is also planned to launch a number of flights from Vnukovo on a regular basis. This will expand the airline’s route network by flying to new airports in Greece.

Moreover, a mutually beneficial partnership for 3-5 years will increase the share of the Mouzenidis Travel in the outbound tourism market in Greece from 30% to 40%.

In turn, the expansion of the route network of a stable European carrier will lead to an increase in the passenger flow of Vnukovo International Airport and, as a result, to an improvement in its economic performance. Vnukovo International Airport has the best transport accessibility among all the airports of the Moscow air hub, which, combined with favorable prices for airline tickets, will provide the market with an excellent product in the field of tourism and air transportation.

The Greek Mouzenidis Group and Vnukovo International Airport feel optimistic about the future and looking forward to an effective and successful cooperation.

Vnukovo International Airport is one of the largest air transport complexes in Russia. Annually about 200 thousand flights of Russian and foreign airlines are handled at the airport. The route network of the airport covers the entire territory of Russia, as well as former Soviet republics, countries of Europe, America, Asia and Africa.

The Vnukovo airport complex with a total area of ​​about 300 thousand square meters is able to provide a capacity of up to 35 million passengers per year.

Vnukovo International Airport, the only one among the airports in Russia, has the Gratitude of the President of the Russian Federation V.V. Putin for the achieved labor successes and high rates in professional activity.

The Greek Mouzenidis Group combines almost two dozen companies, which allows us to provide a full package of tourism services. The Mouzenidis Group owns offices of outbound and inbound tourism in Russia, Greece, the CIS, the Baltic and the Balkans, the airline Ellinair, its own transport fleet and hotels owned and operated under the BOMO Hotels brand.

The multi-faceted capabilities of the holding allow Mouzenidis Travel to create and offer the consumers an unprecedented in terms of variety number of tours and travel options to Greece. Currently, Mouzenidis Group has 18 divisions, over 60 offices in Europe and the CIS countries, more than 2.000 employees, an extensive flight program, and direct flights to dozens of cities in Russia, Ukraine and the Baltic.

As a subsidiary of Mouzenidis Group, Ellinair Airlines started its operations in 2013 in order to provide air transportation for Mouzenidis Travel tourists. Today, the airline operates flights from various airports in Greece to 42 destinations within Greece and foreign countries.

The fleet includes Airbus A319, Airbus A320. Currently, all Ellinair flights from Moscow to Greece are operated from Vnukovo.