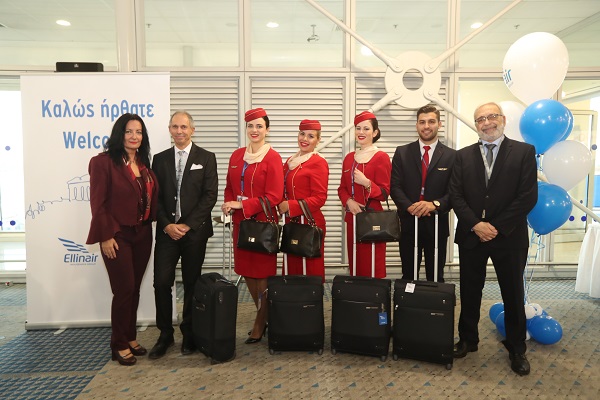 Ellinair inaugurated the operation of its base in Athens, during an event that was held at the International Airport of Athens "El. Venizelos".

The base will be serving an Airbus AB 320 aircraft, with the prospect of the addiction of a second plane. Moreover, the crew for this base will amount up to 30 people.

At the same time, Ellinair announced its winter route schedule for 2018-2019, which includes new flights, more frequencies and attractive departure and arrival hours.

The event took place just before the departure of Ellinair’s aircraft for the route Athens- Thessaloniki while executives of both Ellinair and AIA as well as the flight’s passengers were present.

Mr Thanos Paschalis, Ellinair CEO, noted “Ellinair flights to Thessaloniki are not new, but what is new, is the way we intend to operate them.” While underlining that “We have listened to our customers and have adjusted the arrival and departure times from Athens to suit a single day return. Ellinair is committed to providing a high standard product for the market in Athens and today this is becoming a reality.”

On behalf of the International Airport of Athens, Mrs Ioanna Papadopoulou, Communications& Marketing Director, stated that: “Ellinair 's decision to continue to develop in Athens by creating a base here, is an extremely important development that reinforces the interconnectivity of Athens and offers passengers a wide variety of travel choices. Wishes for success to our airline partner as we remain faithful to our commitment to continue supporting Ellinair in its development plans”.

All of Ellinair ’s aircrafts are AB 320/ 319 and registered to the Hellenic Register.

The new routes that Ellinair added on in its flight program are Athens - Krasnodar and Athens – Rhodes (first time during winter season), while the firm committed in continuing the success of the summer flight program.

The Thessaloniki-Athens route is also set at “attractive” departure and arrival times, twice a day, while the Thessaloniki-Heraklion route will operate once a day.